After last week’s series-ending brawl between the Cardinals and Braves in St Louis, everyone was waiting for the simmering anger to bubble over between these two teams in the follow-up series at Atlanta-Fulton County Stadium. It didn’t happen in the opening game on Friday, but in Saturday’s meeting, all hell broke loose when 15-year-old rookie Todd Benefiel was hit in the head by a pitch from reliever Dave Campbell, sparking a brawl that saw six players ejected from the game, in what would be an eventual 12-3 Cards victory.

Tensions were already on high when St Louis opened the game with three quick runs off Atlanta starter Eddie Solomon (4-10), thanks to singles from Benefiel and Garry Templeton, and a three-run blast over the wall in right by Keith Hernandez, his tenth home run of the season. The Braves would counter with a run in the second, when Gary Matthews tripled home Jeff Burroughs with one out; Matthews would be left stranded at third, however, as Cards right-hander Silvio Martinez (9-11) retired the next two batters on easy infield outs to end the threat.

To read the entire recap, make comments, and see an important section of the scoresheet, click here.

Comments Off on Comet Beaned, Cards Respond in 12-3 Melee

Posted in Game of the Week

Having suffered a collapsed left knee that will require surgery, Brewers pitcher Mark Bomback, called up from AAA just ten days earlier, will be out of action for at least two months, and becomes the first player lost for the remainder of the SP78 season. 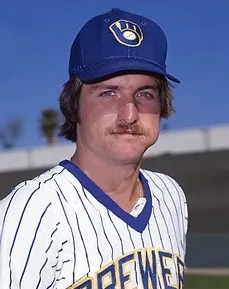 The injury occurred during the fourth inning of the Brewers-Tigers match-up at Tiger Stadium on August 25th, with Bomback starting for Milwaukee and facing Tigers batter Alan Trammell. On the follow-through of his first pitch, Bomback crumpled to the grass in pain, clutching his knee as the ball sailed high over catcher Charlie Moore’s reach. The stricken pitcher was tended to by the team’s trainer, then helped off the field by teammates Cecil Cooper and Sal Bando.

Bomback, who spent the first four months of the season with the Vancouver Canadians of the Pacific Coast League, will end his SP78 campaign with a record of 1-1 and an ERA of 1.89 in three appearances, two of which were starts. During the actual 1978 season, his first in the majors, Bomback went 0-0 with no saves and a whopping 16.20 ERA, over one start and one relief appearance.

“This really pisses me off,” said Bomback to reporters in the visitors locker room, before being transported to Detroit Medical Center. “I was enjoying this year a lot more than the real one.”

To fill the roster spot left vacant by Bomback’s departure, the Brewers recalled pitcher Randy Stein from Vancouver. During the regular season, Stein was 1-2 with a 4.73 ERA in 21 games before sent to the minor league club on July 31st.

Posted in Inside SP78

• Mets pitcher Jerry Koosman, who’s been struggling as a starter with a record of 5-19 and a 4.18 ERA, will be moved to the bullpen in hopes a change of scenery will turn his luck around. During the actual 1978 season, Koosman made six relief appearances to go along with his 32 starts.

• Also for the Mets, starter Nino Espinosa, who’s been hampered by nagging shoulder pain, was sent to the Tidewater Tides of the International League on a rehabilitation assignment. Right-hander Tom Hausman, who is currently 5-2 with a 1.22 ERA in ten starts with the Tides, was called up to take Espinosa’s spot in the starting rotation.

• The Padres returned pitcher Mark Wiley to their AAA farm club in Hawaii, and called up rookie outfielder Don Reynolds for late-inning defense and pinch-hitting purposes. Wiley was 0-1 with a 4.50 ERA during his short stint with the parent club.

• Reds slugger George Foster clubbed his 30th home run of the season on August 24th, off St Louis starter Bob Forsch in an 8-3 loss at Riverfront. It was the second time in his career he’s reached the 30-HR mark, after connecting for 52 the previous season to lead the major leagues.

• San Diego outfielder Dave Winfield collected his second 2-HR game of the season on August 25th, good for four RBI and a 5-1 Padres win. The pair of homers gives Winfield a total of 28 for the season, already a career high.

• Willie Wilson of the Royals became the ninth SP78 player this season to steal home, doing so off Jon Matlack and the Rangers on August 25th. It was Wilson’s first career home theft.

• Pitcher Rick Honeycutt of the Mariners suffered a pulled groin muscle during the fifth inning of the M’s-Orioles match-up on August 25th, and left the game immediately, down 4-0 in what would eventually become a 7-0 M’s loss. He will likely miss his next 2-3 starts.

• In their meeting with the Red Sox on August 25th, the Angels collected five home runs – from Rick Miller, Don Baylor, Carney Lansford, and Ron Jackson twice – to tie an SP78 record, shared by four other teams. The circuit clouts helped the Halos to a 12-3 win.

• While I’ve been housesitting for my friend Julie in Tucson over the past few months, her AZ21 home has has seen 15 SP78 games played, and has jumped from 106th place – with one game played in 2020 – to 23rd on the all-time games hosted list.

• After establishing himself as the team’s best power hitter over the course of the SP78 season, Braves first baseman Dale Murphy has finally been moved up in the batting order, from the eighth spot to cleanup. His teammate, catcher Biff Pocoroba, is hitting .375 for August, and has been bumped up to fifth.

• It was announced today by the Tigers organization that second baseman Steve Dillard suffered a concussion when he collided with teammate Ron LeFlore in Game 1 of a doubleheader against the Blue Jays on August 23rd, which resulted in his immediate departure from the game. Dillard was placed on the 30-day disabled list the following day, while LeFlore – who left the game with an elbow contusion – will be out for at least a week.

Busby Gets Emergency Call-Up to KC

Needing a rested starter for their Friday night game against the Rangers, the Royals called up pitcher Steve Busby from their AAA affiliate in Omaha, where he’ll meet the team at Arlington Stadium in time for their 7:35 pm match-up against division-rival Texas.

Busby is currently 3-7 with a 5.45 ERA in 12 starts for Omaha this season, and though his numbers aren’t necessarily worthy of promotion, he represents the most well-rested starter currently on the Omaha roster, after last pitching on August 20th against Oklahoma City. Another draw for KC manager Whitey Herzog are his five years of major league experience with the parent club, where he went 22-14 in 1974 and hurled a pair of no-hitters in 1973 and 1974.

After making his emergency start tonight, Busby will fill the bullpen void left by struggling reliever Doug Bird, who was sent to Omaha to make room for Busby. Bird was 2-4 with one save and a 5.06 ERA in 23 games for the Royals this season; he will likely return to Kansas City when major league rosters are expanded to 40 players on September 1st.

Posted in Inside SP78