With the Cardinals putting the game away in the seventh with an eight-run explosion, an already tension-filled match-up between two last-place teams became even more strained when a teenage baserunner took matters into his own hands, hammering a final unapologetic nail into the Braves coffin and helping the Cards to a 13-2 rout at Busch Memorial Stadium in St Louis.

Things were quiet enough throughout the first few innings, with Atlanta building a 2-0 lead courtesy of an RBI double from Biff Pocoroba in the second and a solo home run from Gary Matthews in the fourth. But St Louis countered in the bottom of the fourth, thanks in part to a pair of errors—by starting pitcher Eddie Solomon and second baseman Jerry Royster—and a passed ball by catcher Pocoroba, which allowed three runners to cross the plate. Two harmless innings followed, with the Cards still holding a 3-2 advantage…and then everything went horrifically south for the Braves.

Craig Skok, already the fourth Atlanta pitcher of the game, served up seven consecutive singles to St Louis batters to open the seventh, with the only out coming from a Matthews peg from right that nailed Jerry Morales at home trying to score from second. Relief ace Gene Garber was then called on to put out the fire, and unfortunately for Atlanta he did nothing of the sort; he promptly allowed an eighth consecutive single, which was now well beyond an SP78 record, before getting Keith Hernandez to fly out to center for the second out. But Garber could do no more, allowing two more hits—and two more runs—before being pulled in favor of Dave Campbell, who escaped the inning without further damage.

But the eighth brought more troubles for the frustrated Braves. After a lead-off walk to Morales was negated by a double-play groundout by pinch-hitter Garry Templeton, Campbell served up the third hit of the night to rookie sensation Todd Benefiel, already batting .429 for the month, who apparently didn’t appreciate the brushback pitches thrown at him by the testy Braves reliever. With manager Ken Boyer frantically motioning for Benefiel not to run, he promptly did, and took the second base bag cleanly, much to the ire of the already-sour Braves contingent.

“Every pitch that guy threw me was way too inside,” Benefiel told KSD sports director Jay Randolph during the team’s post-game television show. “If he wanted to walk me, why not throw ’em outside? It kinda got me mad, and when I got to first after the hit, I felt like getting back at the guy, so I ran. Besides, who says the Braves weren’t gonna maybe score a bunch in the ninth to tie it?”

With Benefiel now perched on second with two out, Jerry Mumphrey approached the plate knowing full well what would now happen next; Campbell immediately drilled him with a retaliatory pitch, and off to first base trotted Mumphrey with his first HBP of the season. A seething Campbell then walked Hernandez on four pitches, and with the bases now jammed, Ted Simmons wasted no time in connecting for his second double in as many innings, easily scoring Benefiel and Mumphrey with the game’s final runs. After George Hendrick flew out to end the Cardinal eighth, the deflated Braves went down 1-2-3 in the ninth to hand the Cardinals their 13-2 victory.

Lost in all the mayhem was the work of Cardinals middle reliever George Frazier (6-2), who went four strong innings for the win, allowing no runs and just two hits, and backing his own cause by singling twice and knocking in a run. Both Benefiel and Simmons had three hits apiece to lead the Cards, and for the 15-year-old shortstop they call ‘The Sandusky Comet’, his third-inning triple was the first of his young career. And with the win, the Cardinals earned a split of the four-game series, and in five days will travel to Atlanta to take on the Braves again, in a three-game weekend set that could turn out to be the most heated match-up of the SP78 season. 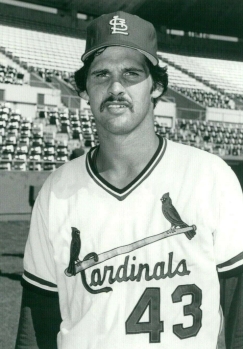 • The game was played in the afternoon at site NM5 in Las Cruces, New Mexico, on a folding card table in the kitchen while listening to nothing.

• This was the second game played at site NM5, and the second in two days.

• This was the fifth game ever played on this date, and the first since 1994.

• My friend Steve P, who I was visiting in Las Cruces for the weekend, was my opponent for the game, and managed his favorite team, the Cardinals. The victory improved his record against me to 31-28.

• It was his ninth time piloting the Cardinals, breaking a tie with the Orioles for his most-managed team.

• Three of those eight consecutive singles in the Cardinals seventh were infield hits, bringing their total in the game to four; not sure how or why this happened, but if it wasn’t the work of the Fast-Action cards, I’d have to say it was a damp Busch Memorial infield, or some lazy defense on the part of the Atlanta infielders.

• In the fourth, with Steve’s favorite player, Lou Brock, on third and Benefiel on second, he tried sending Brock on a steal of home, with Benefiel trying for third…but Brock couldn’t get the jump during that at-bat, and Steve didn’t make the attempt again.

• Steve was of course managing the Cardinals, and thus managing my Todd Benefiel doppelgänger; he’d been wanting to steal me the entire night, and finally got the opportunity in that memorable seventh, even though it went against baseball’s ‘unwritten code’ about stealing with such a big lead. Steve and I both cracked up imagining Boyer screaming at Todd to stay put, and then picturing Mumphrey shaking in his boots and fearing for his life, knowing he was about to get plunked.

• Atlanta catcher Biff Pocoroba’s fourth-inning passed ball was his ninth of the season, tying him with Pittsburgh’s Ed Ott and Montreal’s Gary Carter for second in the National League. And the leader? Cincinnati’s Gold Glove perennial Johnny Bench, with ten.

• I’d used up one of my red-and-white Dixieline Lumber pencils for the game played the day before, so for this game I tried out, for the first time, one of the scorekeeping pencils my friend Brent had given me for a Christmas gift a few years ago, made by a company called CW Pencils out of New York. I still have six of those Dixieline pencils remaining for use, however, plus ten newer green-and-white versions I picked up a few years ago at a Dixieline in Escondido, California.

• After the game, Steve and I celebrated the Cardinals win with dinner at Dion’s, a pizza restaurant not far from his apartment, and on the way home afterwards we stopped for ice cream at a place called Caliche’s. 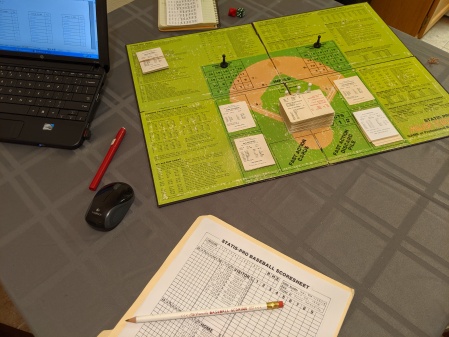