A ‘Morris the Cat Mask Day’ crowd was on hand at Metropolitan Stadium to not only cheer their Twins to a doubleheader win over the visiting A’s, but to honor the orange tabby who’d starred in 9-Lives cat food commercials for nearly a decade, and who sadly passed away the previous month at the age of 17. With 46,000 Morris masks waved festively and frenetically throughout both games, the Twins responded by claiming a comeback win in the opening contest by a slim 3-2 count.

Things didn’t start out well for Minnesota starter Geoff Zahn, looking for his tenth win after a restful five days off; A’s lead-off batter Glenn Burke, not known for his power, opened the game with a sharp line-drive home run into the lower stands in left, spotting the visitors to a sudden 1-0 lead. It was Burke’s second home run of the season, his second with the A’s, and just the third of his short career. One inning later, Oakland struck again; with Dave Revering on second after he’d doubled with one out, Taylor Duncan capitalized on a 3-1 offering from Zahn and poked it to right field for a two-out base hit, sending Revering home to make it a 2-0 game.

It would be the last hit Zahn would allow that afternoon; save for a bobbled ground ball by shortstop Roy Smalley that went for an error, he would retire the remaining 22 Oakland batters he would face, allowing his teammates plenty of opportunity to mount a comeback. Which they did, with two out in the fourth; facing A’s rookie Alan Wirth, Smalley beat out an infield grounder for a single, then scored when Dan Ford followed with a high fly to the deepest part of center that dropped over the reach of a sprinting Burke. The ball struck the low fence on one hop and ricocheted off Burke’s leg as a speeding Ford was pulling into third; coach Karl Kuehl waved him on through after spotting Burke’s miscue, and Ford hustled home with the Twins’ second run.

The score would remain knotted at 2-2 until the Twins half of the eighth, when designated hitter Rob Wilfong singled off Wirth to open the frame. With only two steals to his credit this season, Wilfong surprised everyone and broke for second, beating the high peg from Jeff Newman to put himself in scoring position. Follow-up batter Willie Norwood, demoted to the ninth spot after batting .167 over the first two weeks of August, then blooped an opposite-field base hit to right that scored Wilfong well ahead of Joe Wallis’ desperate throw, bringing an end to Wirth’s afternoon. Reliever Bob Lacey came on retire the next three batters, but the damage had been done, and the Twins were now ahead by a run entering the final frame.

A confident Zahn then made quick work of Mike Edwards, Mario Guerrero, and Mitchell Page to close out the ninth, and the Twins found themselves victorious in a 3-2 come-from-behind win in Game 1. Even thought the Twins could muster only six hits, and no Twins batter had more than one in the game, hitting honors went to Norwood, whose clutch Texas Leaguer in the eighth turned out to be the game-winner, dropping A’s starter Wirth (10-7) to his third consecutive loss, after a promising 3-0 month of July.

For Zahn, his three-hit gem evened his season record at 10-10, and bumped the Twins into a temporary second-place tie with the Royals in the AL West. Depending on the outcome of Game 2, the Twins could find themselves sole possessors of second, 3½ games behind the front-running Rangers, or back in third place, a full four games out. “No matter what happens in the nightcap,” said Zahn after the game, “we’re still in the race, with a whole mess of games against the Jays, Indians, and Chisox coming up.” 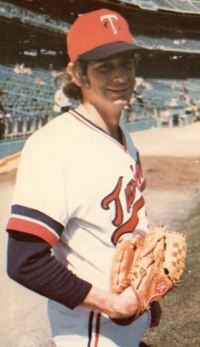 • The game was played at night at site AZ18 in Peoria, Arizona, on the living room table while I listened to songs from 1984 on my HP Mini laptop.

• This was the 46th game played at site AZ18, good for 10th place on the all-time games hosted list.

• This was the fourth game ever played on this date, and the first since 2015.

• I created the ‘Morris the Cat Mask Day’ promotion after I’d recently found an old This Day in SP78 History comment made by my friend Steve P, after the Twins had spoiled a Cap Night game at Oakland earlier in the season. He wanted a ‘Spuds McKenzie Mask Night’ game to be ruined by the A’s the next time they played at Minnesota, but I reminded him that Spuds McKenzie wasn’t around in 1978, and that a Morris the Cat promotion would make more sense. I then discovered two things: Morris the Cat passed away in July of 1978, and the current slate of games I was playing in the AL included the last visit of the season by the A’s to Metropolitan Stadium! Thankfully, I hadn’t played that doubleheader yet, so I quickly added the Mask Day promotion to the schedule.

• Believe it or not, there really was a ‘Spuds McKenzie Mask Night’, which Steve and I had attended back in 1987; an October 2nd game at Anaheim Stadium between the Indians and Angels, where Spuds masks were handed out to all fans in attendance (one discarded mask we’d found had ‘Can I lic you?’ crudely written on the back). And in case you’re wondering, yes, I still own my Spuds mask, sans any misspelled comments.

• In the sixth inning of a 2-2 game, with Twins veteran Rod Carew on third base, I decided I was going to have him steal home, since he’d done so already 16 times in his career (seven in 1969 alone), and it would be a fun way for Minnesota to take the lead. He was a ‘B’ stealer, and it would’ve been his first SP78 home theft, but unfortunately the Fast-Action cards dictated otherwise, and he was picked off of third by A’s catcher Jeff Newman.

• With two outs in the fourth, Twins batter Hosken Powell lifted a high foul fly near the A’s dugout; A’s catcher Newman and third baseman Taylor Duncan rushed over to make the play as the ball drifted towards the stands…where a Twins fan interfered with the play! Powell was ruled out, and the home inning was over, all thanks to an overzealous Twins rooter who was then unmercifully booed by more than 40,000 outraged fans.

• Game 2 of the doubleheader will indeed be the last meeting of the year between the A’s and Twins…that is, unless they happen to be tied for first in the AL West by season’s end, and meet in a 1-game playoff. Which is unlikely, with the A’s currently 17 games out of first.

• And finally, below is a photo of Morris in his prime; to watch a fun commercial featuring the famed cat in action, click here. 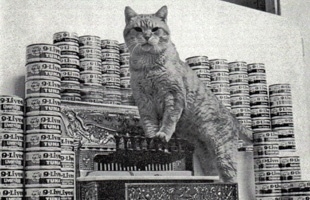