With the 61-51 Tigers facing the worst team in the major leagues, the 39-76 White Sox, what was last on everyone’s mind at Comiskey Park this afternoon was an out-and-out pitcher’s duel between Tiger newcomer Jim Slaton and Chisox rookie Mike Proly. But it was a duel they got, as the two battled for seven scoreless innings before Sox outfielder Ralph Garr singled home Jorge Orta from second in the eighth, giving the Pale Hose a tension-filled 1-0 win over their American League rivals from Detroit.

Pinch-hitter Alan Bannister had opened the home half of the eighth with a base hit to left off Slaton (7-11); after stealing second, Bannister then tried to score when Orta blooped a base hit to center, but Ron LeFlore’s pinpoint throw to catcher Milt May nailed Bannister on a close play, keeping the score deadlocked at zero. Orta advanced to second on the throw, and after Bill Nahorodny flew out to shallow left for the first out, Garr followed with his RBI hit, scoring Orta with what would be the game’s only run.

The Tigers had their chances, however, putting a baserunner on third with one out in the fourth, and putting two runners on in both the seventh and eighth, but they couldn’t capitalize on any of the opportunities. And when Alan Trammell coaxed a walk off Proly with two out in the ninth, but was denied a scoring chance when third baseman Eric Soderholm snared a line-drive shot down the line off the bat of Rusty Staub to end the game, the pent-up frustration finally exploded from Slaton. From the steps of the visitor’s dugout, he let loose with a torrent of obscenities that was apparently directed at the abandoned home plate area, and angrily flung three batting helmets onto the playing field before disappearing down the tunnel to the Tiger locker room.

“Our defense was there, but our offense went AWOL,” said manager Ralph Houk, displaying a bit more restraint than Slaton. “We killed four rallies for Jimmy with four double plays, but you can’t win games on field work alone. And you have to give their guy credit…he pitched a hell of a game.”

And so far, a hell of a season as well. For Proly, his second year in the major leagues is proving to be an effective one, especially while pitching for a last-place team that possesses the lowest winning percentage in either league. He allowed just four Detroit hits over nine innings, all singles, and walked just two batters in pitching his first shutout of the season; after today’s victory, his won-lost record has improved to 5-3, and his ERA now stands at a spectacular 1.80.

Which is good news for the Sox, who could use the added boost to their dismal mound corps; despite their troubles, the squad did take two of the three weekend series games from the Tigers, who could manage to score just one run between their two losses. Today’s game was also the last meeting of the season between the two teams; from here, the Tigers will head home for a pair of two-game weekday sets with the Royals and Indians, while the White Sox travel to Texas for a four-game match-up with the division-leading Rangers. 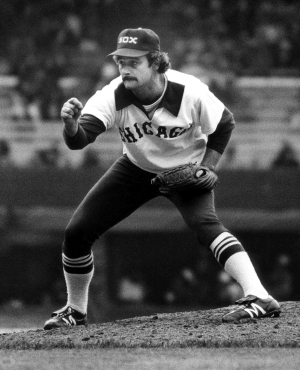 • The game was played at night at site AZ18 in Peoria, Arizona, at the living room table while I listened to Past Light by William Ackerman.

• This was the 41st game played at site AZ18, good for 13th place on the all-time games hosted list.

• This was the seventh game ever played on this date, and the first since 2015.

• This was also the third of five Mango Memorial Games, honoring my cat Mango who passed away on this date in 2013.

• I played this game on a Labor Day Monday, my first real workday off after quitting my job at John C. Lincoln Deer Valley Medical Center in Phoenix, where I wrapped up my final shift the previous Friday. To say this was a celebratory game played by me would be quite the understatement.

• This was the 40th win for the White Sox, the last team in the majors to reach the forty-win mark this season.

• My in-game snacks included a bowl of Cheez-Its, which were served in Mango’s old treat dish, as you can see below. 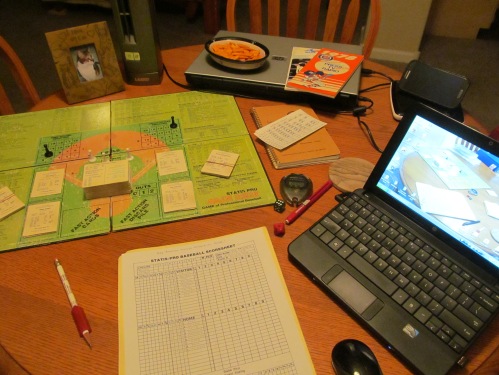