For those of you visiting this post because you happened to see the heading above, thinking this was an article about a charity softball game with teams managed by John Travolta and Olivia Newton-John, I apologize…this is definitely not that article. Instead, this is a story about a Statis Pro baseball game played nearly forty years ago, outside of the confines of my SP78 Replay season, between two teams managed by my brother and his friend, and played while they snacked on a decidedly non SP78-sanctioned snack item.

The date was July 8, 1981. My brother Scott was at our house on Palacio Place in Rancho Bernardo, California, hanging out with his friend Matt, while I was at a screening of Superman II at our local multiplex with my friend Brent. At some point during the evening, the two decided to play my Statis Pro Baseball board game, with Scott taking the reins of his favorite team, the Dodgers, against Matt and the hometown Padres.

First, take a look at the pair of Statis Pro player cards below, featuring two random players drawn from NL teams that were not involved in Scott and Matt’s game: 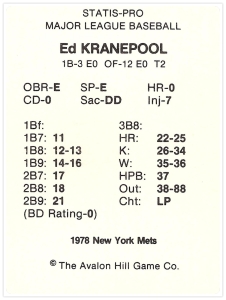 Now have a look at the player cards for second baseman Davey Lopes and relief pitcher Bobby Castillo, both from the Dodgers, who were managed by Scott that fateful day:

Trust me, those dark spots aren’t the result of headfirst slides. No, those are the remains left by greasy 14-year-old fingers, which had indulged in a now-forgotten brand of potato chips while playing the game: Lays, Bell, Granny Goose, Laura Scudder, Charles Chips…any one of them could be held responsible. After 30-plus years of oxidation, handling, and whatever other cardstock-darkening powers had taken their toll, the stains have since turned a sickly rust brown, a permanent reminder of the ill-fated exhibition contest that took place that summer evening so many years ago.

But what of the opposing team’s cards, managed and handled by Matt? Wouldn’t his hands have been greasy as well? A check of the Padres squad tells us a different story: there is noticeable staining, but it’s very light, and though I did find one tell-tale spot on Matt’s starting pitcher that day, Mickey Lolich, the cards were otherwise fine. Which then makes me wonder: was Matt wiping his hands each time before handling the cards, or was Scott just hogging all the chips?

In the end, did any good come out of this? Well, besides the fact the Padres topped the Dodgers by a slim 1-0 score, and Scott and Matt no doubt had a fun time playing the game, the event prompted me to initiate a new set of rules when it came to snacking during gameplay: only pretzels or Cheez-Its were allowed from that point on. Anything else, including Fritos, Cheetos, Corn Nuts, and Nacho Cheese Doritos, were now strictly forbidden.

I’m sure Matt, wherever he is, has long forgotten about the game, but what about Scott? He would partake in only 14 more official Replay games over the course of the next ten years (and one more co-managing stint in 2000), so perhaps his memories of the season aren’t as sharp as they used to be. Does he remember the game, and the havoc his grease-laden mitts wreaked? When I asked him about it over the phone recently, he told me he had no recollection of the game, or even the incident itself. Did the experience leave such an emotional scar that his mind had wiped it clean from memory? Or is he ashamed to admit the truth: that his unabated eighth-grade hunger defiled the bright-white home uniforms of the LA squad forever?

Either way, I’m happy to say the damage was only cosmetic, and the cards have remained as playable and functional as they ever were. Now, the Grease Game can be looked back upon fondly, as another memorable—and yes, important—side note to my SP78 Replay season. As for you Grease enthusiasts, who’ve stuck it out to the end, here’s a little something for you:

6 responses to “The Grease Game”